On November 19,  the Lord called to himself Fr ROBERT Farrugia, O. Carm., aged 78.  Mass praesente cadavere was celebrated at the Carmelite Church, Balluta, on Monday, November 20, at 2.15pm.  May God grant him eternal rest.

ON TUESDAY at the Mdina Carmelite Church there will be a prayer vigil with meditations on Fr. Avertan’s thoughts on the passage for the afterlife. We encourage you all to attend.  The Prayer Vigil starts at 7.00pm.

ON WEDNESDAY, the Archbishop will be leading the Rite which brings to a close the Diocesan Case for the Beatification of Carmelite Fr. Avertan Fenech.  The ceremony will start at 5.00pm at the St. John’s Co-Cathedral, followed by a thanksgiving mass.  We are all encouraged to attend.  Transport from the Balluta Church to the St. John Cathedral will leave at 4.15pm.   Transport bookings can be made in the sacrsity.

ON SATURDAY at the Mdina Convent there will be a seminar on Fr. Avertan. The Seminar which will be from 9.30am to 4.30pm is organised by the Carmelite Institute and will be lead by Fr. John Berry.

On the road to sainthood

The diocesan inquiry examining the case for beatification and canonisation of Fr Avertan Fenech ends today. Fr Hermann Duncan looks at the final days of the religious man. 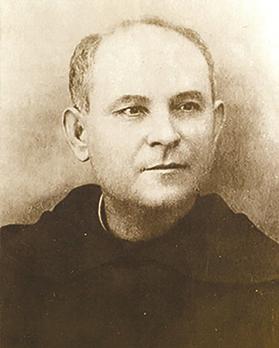 The Archbishop’s Curia recently issued a letter stating that the diocesan inquiry examining the case for the beatification and canonisation of Fr Avertan Fenech, O.Carm, which was started on February 2, 2017, will be concluded today.

Fr Fenech, born Luigi, was a Carmelite friar who devoted his life to prayer and sacrifice. He was born and baptised in Mosta in July 1871. As a young boy, he wished to become a Carmelite friar and as he grew older he felt his calling to religious life growing stronger.

He entered the Carmelite Or­der in February 1888 in the Valletta Priory where he started his novitiate. He took his solemn vows in February 1892. His first years as a priest were spent in the Balluta Priory, and in 1896 he was chosen to be formator of students at the priory.

His students regarded him as a model of Carmelite spirituality. He was later sent to the Mdina Priory where he became formator of the novices. He was also a provincial counsellor, secretary to the provincial and vice-prior at the Mdina Priory.

There is a very interesting book about him written by Fr Lawrence Sammut, O.Carm, who was one of his novices. Only recently a second edition was published by the vice-postulator, Fr Charlò Camilleri, O.Carm.

It was on May 23, 1932, that Fr Pio Compagno, the new prior of the Mdina Priory, called a community meeting to choose the priory officials. It was set for 10am. Fr Fenech was always very punctual but this time he was late, so the prior became concerned and decided to check up on him in his room. They knocked a couple of times and when there was no answer, they opened the door to find him lying on the floor, with a pencil in his hand. Doctors were immediately called in.

Professor Ferro was quick to arrive. He examined Fr Fenech and diagnosed that he had suffered a stroke as the right half of his body was paralysed. When Fr Avertan regained consciousness he remained very calm… he was rather joyful, thinking that he would soon be joining the Lord in heaven. The priory’s general practitioner, Joseph Micallef, soon arrived, and together with Prof. Ferro, thought that Fr Fenech could regain his mobility with the help of massage and exercise.

The prior did all he could to care for Fr Fenech. He contacted two good nurses, Paul Muscat and Joseph Caruana, to give him massages and the necessary treatment required. They were also asked to stay with him day and night so that if he required medi­cal assistance they could quickly call the doctor.

His students regarded him as a model of Carmelite spirituality

During each doctor’s visit, Fr Fenech showed a strong wish to get well – for one particular reason: to be able to celebrate daily Mass. This fact was not only corroborated by the friars of Mdina but also by those who would visit him. Despite his bad state of health, he was never heard complaining.

Nearly a year passed since Fr Fenech’s stroke and he was still bedridden without any improvement. At this point his speech became slurred and half his body was not functioning. The doctor still believed he could get better and advised him to get up and walk around the corridors, supported by someone. Fr Fenech obeyed the doctor’s advice religiously, and would manage to do two or three rounds before resting.

Despite his efforts, his leg did not improve, so he was forced back to bed.

After a number of years, the friars thought it was best to have Fr Fenech transferred to Santo Spirito Hospital in Rabat for special care. 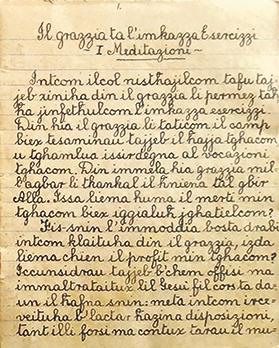 One of the writings of Fr Avertan Fenech.

From the start of 1943, his condition began deteriorating. His skin was turning yellow and he was getting thinner by the hour. In June 1943 he had another stroke and was administered the last rites. Even though he seemed to improve, this good religious man realised that the gates of heaven were already open for him. Finally, between the night of October 31 and November 1, 1943, Fr Fenech passed to eternal life.

After his death, his life, his writings and the graces he granted were examined by the Church. Extensive research has now been finalised and the Archbishop’s Curia will be closing the inquiry of this servant of God and sending it to Rome.

Today, on the Solemnity of all Saints, and the day Fr Fenech went to meet the risen Lord, a cele­bration in St John’s Co-Cathedral in Valletta will be held at 5pm. There will be the canonical rite on the closing of the diocesan inquiry, and afterwards, a solemn Mass will be celebrated by Archbishop Charles Scicluna.

Everyone is encouraged to attend and pray for more graces through the intercession of Fr Fenech.

7. Throughout the month of November all the 6.30pm masses will be for the souls of our departed ones which you have listed for these special prayers. At 5.55pm there will be the Rosary and prayers for the souls.  Those who wish to add their dearly departed may collect a form by the church doors and hand it to one of the priests.

There are no sermons to show.